I never made a better investment in a streaming service than subscribing to the Criterion Channel when it premiered last April. Criterion Channel is the streaming platform extension of the Criterion Collection, the famous home video line of high quality classic and contemporary films. The Criterion Channel library contains great films of every era, genre, and country. I’ve mostly watched their cult films (glad I got to experience Demon Seed, God Told Me To, and Phase IV, because … wow, those are nuts) and classic Hollywood movies, in particular the deep dives they take into film noir. Since signing up for Criterion, my knowledge of film noir feels like it’s doubled.

This month Criterion Channel is presenting a topic that’s personal for me: the influence of film noir on the Hollywood Western. Film noir was not recognized as a genre during its main period of the 1940s and ‘50s. It was French critics who first used the term as they started to study the US-American crime films they had missed during World War II. Not until the 1970s, after the original noir moment was long over, did the phrase “film noir” become established in the movie lexicon. Whether film noir is a genre or not is still a hot topic of debate among film scholars. I like Alain Silver’s definition of it as a “style” rather than a genre. That definition helps to understand how noir influenced an established genre, the Western, that would seem to have nothing in common with it. What we might call the “Western noir” isn’t as much a transplanting of crime film tropes into the Western as it is the dark style and troubled psychology of film noir affecting common Western stories. The two film types do have one important element they share: most are about crime, and often the criminal is the protagonist.

END_OF_DOCUMENT_TOKEN_TO_BE_REPLACED

Of the quintet of Western hits of 1939 that revitalized the genre, Dodge City is the most straightforward. It’s an action spectacle picture first and foremost. It’s the most accessible of the five for twenty-first-century audiences—after Stagecoach, of course, which is flat-out one of the greatest films ever made and therefore accessible.

Dodge City takes a basic view of the taming of the West, where civilization manifests as the railroad and a gun-wielding Errol Flynn flashing a killer smile. It’s a big glob of Old Hollywood glory, with the bonus of gorgeous early three-strip Technicolor images filling the screen. And I mean gorgeous. If you get nothing else out of this post, at least know that Dodge City is one of the finest-looking things ever placed onto celluloid. It’s not quite Barry Lyndon, but it’s still something to behold.

END_OF_DOCUMENT_TOKEN_TO_BE_REPLACED 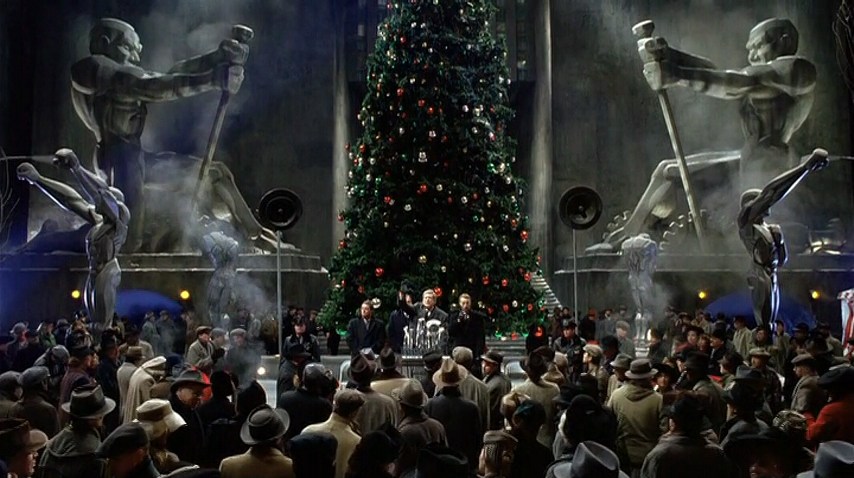 I don’t really celebrate Saturnalia or Solstice or any of the lesser-known winter holidays. I hang out with relatives and friends who do, so I don’t boycott seasonal happenings. But the winter holidays simply do not groove with me, the same way winter in general doesn’t. That’s why I live in Southern California. I’m one of the October People. Once October is done, I’d prefer we move rapidly to the new year. Add two months to early summer, cut out November and December, and it’s all good. But I don’t control axial tilt and the orbit of the Earth, so I’ll just have to take it.

I do like winter in one place, however, and that’s in the movies. Groundhog Day, The Great Silence, Runaway Train, and The Thing are winter movie favorites. And there are a few films I associate with the winter holidays, i.e. “Christmas” (you thought I wasn’t going to even use that word in this post, didn’t you?)

END_OF_DOCUMENT_TOKEN_TO_BE_REPLACED

My article this week for Black Gate is praise for the 1956 giant monster classic, Rodan, the first of Japan’s giant monster (kaiju) films photographed in color, and only the second kaiju to have its own headlining movie, following the first two Godzilla films. The flying monster Rodan (Radon in Japanese, a contraction of Pteranadon) has a special place in the Japanese giant monster pantheon thanks not only to its auspicious debut, but also its many guest spots in the Godzilla films since: Ghidorah, The Three-Headed Monster (1964), Invasion of Astro-Monster/Monster Zero (1965), Destroy All Monsters (1968), Godzilla vs. Mechagodzilla II (1993), Godzilla: Final Wars (2004), and now as one of the upcoming quartet of beasts for next year’s big-budget Godzilla: King of the Monsters. The newest trailer shows Rodan in aerial action with destructive power to match the magnificence of the visual effects in the ’56 original.

END_OF_DOCUMENT_TOKEN_TO_BE_REPLACED

This is Movie #2 of my resumed attempt to examine all five hit Westerns of 1939.

A re-cap for those coming in late (you’ve only missed Destry Rides Again at this point): 1939 was the most important year for the Hollywood Western. For most of the 1930s, the genre was relegated to B-picture status, with cheap films churned out by smaller studios like Republic, Mascot, and PRC as part of continuing series like the Three Mesquiteers. But in 1939, a storied year for the film biz, five A-budget Westerns turned into smash hits that changed how filmmakers would handle the genre for the next twenty years.

Union Pacific is the least-seen of the “Big Five” today. Its gift to viewers in 1939 was an enormous scope they weren’t used to seeing in the Western, or at least not since the last gasp of the epic Western in the early ‘30s with The Big Trail (a massive flop) and Cimarron (arguably the most forgotten Best Picture Oscar-winner ever). Cecil B. DeMille brought his customary sweep to the milieu; although not a great director, DeMille was a superb showman and could handle big pictures in a way that appealed to audiences. Union Pacific is no exception, even if it looks paler besides the other movies of the Great Western drive of ’39. (I’d call it a tie with Jesse James for last place.) It’s a middle-of-the-road crowd-pleaser, what we would today called a “popcorn movie,” although the way it mythologizes Western Expansion for contemporary audiences is intriguing.