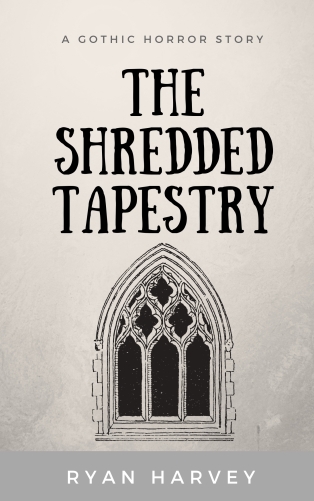 You can now purchase my Gothic horror story, “The Shredded Tapestry,” from Amazon to read on Kindle or the Kindle App.

“Vengeance is mine, sayeth the Lord.” But that is a lie. The Devil may also repay, when he has been falsely accused and long denied…

When highwaymen hold up seeker-of-curiosities Richard Davey on a lonely road in Bavaria, it’s only the beginning of the nightmare. Fleeing from a hissing apparition on the road, Richard finds himself in an old monastery. The monks offer him shelter for the night—but what shelter can there be from a diabolic vengeance in feline shape, seeking redress for a crime that has haunted the monks for over two centuries?

Previously published in the print anthology Candle in the Attic Window and now available for Kindle, “The Shredded Tapestry” is a thrilling Gothic horror story in the classical English tradition from award-winning author Ryan Harvey.

“The Shredded Tapestry” first appeared in a Gothic fiction anthology, A Candle in the Attic Window (Innsmouth Free Press, 2011). The anthology is currently out of print with no ebook available, so I’m offering the story to readers on its own—for just one penny short of a dollar. The only changes I’ve made to the published version is to restore my US (Usonian) English spellings; Innsmouth Free Press, a Canadian publisher, understandably went with Canadian spellings. Their call, of course, but I prefer gray to grey.

I wrote “The Shredded Tapestry” specifically to get into that anthology. There are few publications interested in the classic-style Gothic tale, and I’m not sure I would have found a home for the story if Innsmouth Free Press had turned it down.

But even if “The Shredded Tapestry” never saw print, it was a fantastic writing experience and I’m still pleased with the results. Writing it gave me the opportunity to examine from within one of my favorite types of historical genre fiction, and more narrowly allowed me get into the feeling of the works of Algernon Blackwood, whose stories “Ancient Sorceries” and “Secret Worship” were direct influences. Another influence was a trip I took to the Bavarian city of Regensburg, where a legend about the construction of the Medieval bridge crossing the Danube intrigued me. Mushing together Blackwood, Regensburg’s bridge and Scots monastery (an actual thing), my interest in a clash between Anglican and Catholic aesthetics (a common theme in late eighteenth-century Gothic literature), a touch of the movie High Plains Drifter, and the holdup scene from Barry Lyndon—and I ended up with this bit of old-fashioned terror in a Bavarian monastery. I think it’s just right for your short Halloween read!

At the time A Candle in the Attic Window was published, Innsmouth Free Press conducted an interview with me for their website, which provides further background details on “The Shredded Tapestry.” An excerpt from my answer when asked what character I would be in a Gothic movie or TV show:

Many people fantasize about being a vampire. Not me: I’ve always wanted to be a vampire slayer. So, in a TV show, I would be the “Peter Cushing character.” I’m the good guy—in fact, I’m probably the only defense you have against the terrors of the night. However, I’m bizarre, monomaniacal, clinical, and intimidating. I know what these monsters are; you are underestimating them. If you don’t listen to me and do exactly as I tell you, all of you will die horrible deaths and your souls will suffer in eternal torment! And that is why I am going to drive a stake through your sister’s heart and make you watch!

That’s me: the perpetual Peter Cushing fanboy. Cushing would have made an excellent John Silence, Algernon Blackwood’s “psychic detective.”