Probably no single US Western had more influence on the Italian revision of the genre in the 1960s than Vera Cruz. You can imagine Sergio Leone watching this movie and saying, “Hot damn, this is how I wanna make ‘em!” (Sam Peckinpah was watching too; The Wild Bunch contains direct visual quotes from this earlier trip down south for trigger-happy gunslingers to shoot up Mexico.) It was also a technical development in film formats: not exactly a tremendous leap forward, but something that placed the wider screen in reach of studios with less cash.

But the visual style of Vera Cruz isn’t what had an impact on the Italian Western. It still looks like a 1950s A-List Hollywood Western, with the exception of actual Mexican location shooting. What changed was the addition of sneering cynicism and an army of self-interested shady folks double-crossing each other over a gold shipment. That plot line encapsulates in a single sentence the first half of Sergio Leone’s career, but it wasn’t what audiences expected from a big-budget Western in 1954

Vera Cruz holds up robustly today without having to view it only through the films it influenced. It has great performances from two legendary leading men (Gary Cooper and Burt Lancaster), a crackling script, sterling supporting cast (young Charles Bronson acting under his given name of Charles Buchinsky), and a fully loaded magazine of violence and cynicism. This cynicism and casual violence made the film unpopular with critics at the time. But it was a success with audiences and assured the career of Robert Aldrich (The Dirty Dozen) as a tough-guy action director. Its amoral attitude also makes it easy for contemporary audiences to enjoy now. Vera Cruz is a rough film that avoids the maudlin and the idealist. Gary Cooper’s character keeps threatening to switch to syrupy idealism—he certainly has a Southern gentleman feeling buried in him—but the script never lets that sort of sentiment get the better of it.

The historical backdrop is the later years of the French intervention in Mexico and Benito Juárez’s Republican revolt against it, circa 1866. This means French villains in a US Western—nothing like vile European colonialism inserted into the North American frontier! It also means sequences in royal palaces crammed with genuine Old World aristocratic splendor, which makes a thuggish lout like Burt Lancaster’s Joe Erin that much more entertaining.

Erin is one of the American fortune-seekers who have traveled south of the border to hire out in the conflict between the French-controlled Mexican government under Emperor Maximilian (George Macready, Paths of Glory) and the Juarista freedom fighters. Erin and his band—which amazingly includes Jack Elam, Ernest Borgnine, and Charlie Bronson—hire out to whoever pays them the most. And Erin will betray anyone to make sure he gets the biggest cut.

But according to the opening title card, some of the mercenaries “came alone.” One such is Benjamin Trane (Gary Cooper) of Louisiana, formerly of the Confederate Army and now a man without a cause except survival. Trane falls in with Erin and his band of character actor goons, who are on their way to offer repeating rifles and the fingers to pull their triggers to Emperor Maximilian.

The opening scenes, where Erin immediately tries to double-cross Trane, only to have Trane turn the tables on him and make off with his horse, show exactly what sort of relationship these men will have for the rest of the movie. Despite all the conniving and political powers in the story, the centerpiece is always Gary Cooper’s gentleman with a granite edge stacked against Lancaster’s grinning immoral rogue. You couldn’t ask for a better backbone to a film: these two legends deliver everything expected from actors of their mythic standing. Lancaster is particularly wonderful with the horrid “I’m gonna get ya’” toothy smile he perpetually wears. You also get to listen to flinty exchanges between them like this:

Trane: How much? [For the horse]

Joe Erin later makes an astute assessment of Trane’s character: “I don’t trust him. He likes people, and you can never count on a man like that.” Lancaster has plenty of killer lines like this and makes the most of them. I love Gary Cooper, he’s one of my favorite classic Hollywood actors, but I have to admit Lancaster owns the film. (His company, Lancaster-Hecht, produced it, so he literally owned it.)

After a run-in with the Juaristas under General Ramirez—shot in an astonishing 360° camera move showing armed men rising up in a wave from the walls of a plaza—Trane, Erin, and Co. meet the Marquise Henri de Labordere (Cesar Romero, the Joker from Batman ‘66) and his imperial soldiers. Henri escorts them to the emperor’s palace in Mexico City. Emperor Maximilian has a job for the Yankees and the ex-rebel: guard a coach carrying Countess Marie Duvarre (Denise Darcel, Tarzan and the Slave Girl) safely to the port of Vera Cruz. It soon becomes clear to Erin and Trane that this is only an excuse; the ornate coach is secretly loaded with six million dollars in gold coins, destined for Europe to raise mercenaries for the emperor’s war.

However, that money will never make it to Europe because everyone—and I seriously mean everyone—on the caravan to Vera Cruz wants to grab the loot for themselves. Duvarre has her plans to escape with the money, and makes a deal with Trane and Erin. But the countess is about as trustworthy as Erin’s grin, and Henri and Captain Danette (Henry Brandon, The Searchers and Assault on Precinct 13) also have schemes to snatch the gold that may or may not include the Countess.

I mentioned French villains before, but every single character plays the  villain at some point in the avaricious cross-fighting. The only exception is General Ramirez (the very not Mexican Morris Ankrum, Earth vs. the Flying Saucers), who sincerely believes in the ideals of Juárez’s fight against Emperor Maximilian. Benjamin Trane is also a puzzler. The audience never knows until the end what Trane wants—because he doesn’t quite know either. A beautiful spy for the Juaristas (Sarita Montiel, Run of the Arrow), will put it in focus for him. But even she has her own pocket-lining agenda. 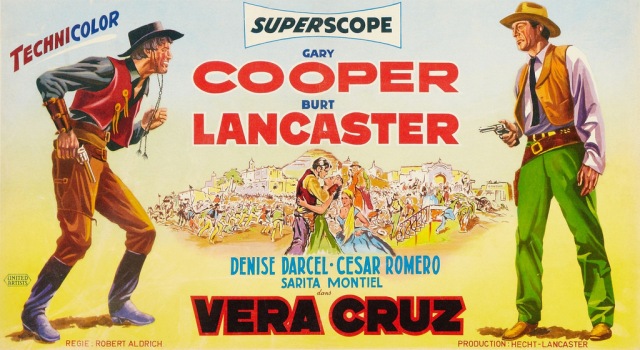 What’s the technical development of Vera Cruz I mentioned up top? This was the first film released in Superscope, a budget widescreen process made to compete with the explosion of CinemaScope at 20th Century Fox and VistaVision at Paramount. RKO and a number of other smaller studios picked up the process. Superscope isn’t a photographic process, but a post-production one where a 2:1 image is cropped from the original 35mm frame and then turned into a squeezed anamorphic image for projection.

Although Superscope was intended as a lower cost method to create the wider screen experience audiences were demanding, it ended up gaining a second life in the 1980s when it emerged as “Super 35.” Shooting in Super 35 made it easier for movies to adapt to 4:3 televisions and VHS, since with the cropping at the top of the bottom removed, the image needed less pan-and-scan. The spherical lenses used were also easier to adapt to special effects sequences. Super 35 was used for mega-budget productions like The Lord of the Rings and Titanic.

The cropping and squeezing of Superscope was still going through rough patches in its early days. Combined with the lower quality film stock compared to the later Super 35 films means Vera Cruz is often grainy with dark and occasionally obscured night sequences. The grain is especially apparent on any shot with an optical, such as a dissolve. Cinematographer Ernest Laszlo was one of the greats in the art form, and the production shot on beautiful Mexican locations (including a stop by a pre-Columbian pyramid—not something you often see in a Western). But unfortunately much of Vera Cruz looks ragged, and I think early Superscope can shoulder the blame. Superscope lacks the image quality of the other widescreen processes of the day because it used less of the 35mm image as a sacrifice to achieving a wider image.

Unavoidably grainy film aside, Vera Cruz is a fun and mean film that was ahead of its time—a ‘70s Western produced twenty years early. 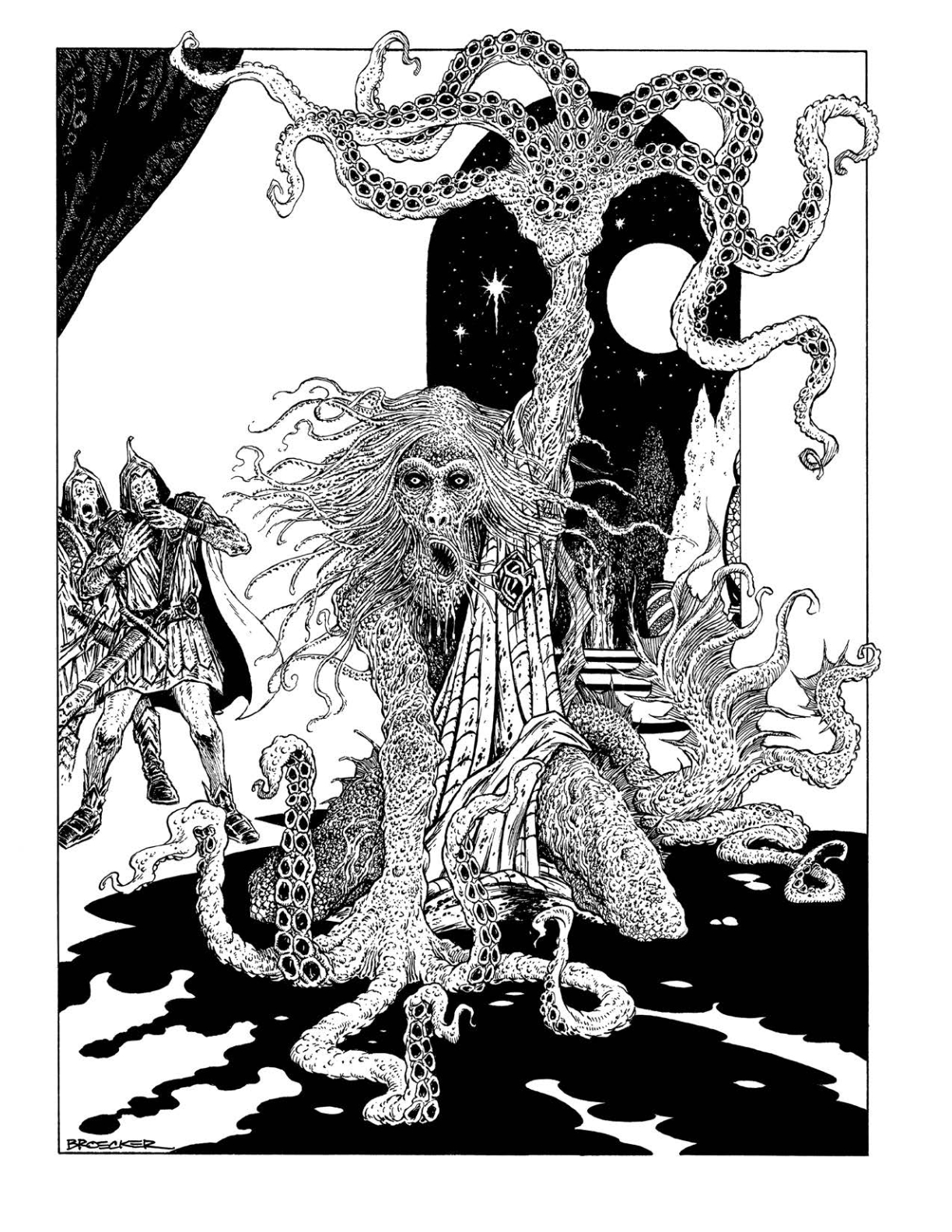