Poor Thanksgiving! Not only is it jammed awkwardly between two larger, more ornate holidays, both of which are chewing away at it from top and bottom, but it doesn’t have much in the way of a horror movie tradition. Halloween, of course, is wall-to-wall with horror goodies—it’s the only movie genre that has its own holiday!—and the winter seasonal horror film has developed into its own subgenre, offering everything from family friendly thrills (Gremlins) to gruesome slasher flicks (all those Silent Night, Deadly Night films; please note this is not a recommendation).

Thanksgiving is the official holiday for The Twilight Zone and Mystery Science Theater 3000, so it has that going for it. In fact, I’d prefer to drop the whole “Thanksgiving” business and think of the fourth Thursday in November as MST3K Day. Discard the turkey and family and football and replace it with pizza and the Satellite of Love. I’m not excited about turkey, too much family gets stressful, and I hate football.

But I do have two horror film picks that are good matches to the season. Once the kids are in bed, the adults can release pent up tensions and guilt about the holiday with The Witch (2015) and Ravenous (1999). 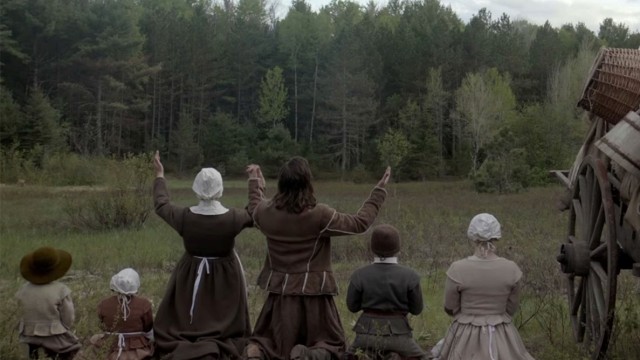 The image of the “First Thanksgiving” that bored you so much in elementary school paints a rosy Jean Leon Gerome Ferris picture of the puritan colonies in North America in the first half of the seventeenth century. It was actually a miserable period, and considering how joyless the Calvinist religious philosophy of those settlers was, life must have been almost intolerable. The Witch, set in New Hampshire in the 1630s, is a brutal dose of reality to counteract annoyingly cheerful school pageants and Thanksgiving TV specials. (Do they still have those? The Charlie Brown one is pretty good.) Robert Eggers’s period horror movie brings the religious practices of the puritans to the forefront, and hot damn is it depressing. “Your infant brother who just died horribly—his soul might be in hell! Ah well, can’t know for sure.” (“Fain would I tell thee Sam sleeps in Jesus, that thou wilt, that I will, but I cannot tell thee that. None can.”)

Although this is a film about a witch living in the woods near a solitary family (and the witch is shown early so there’s no doubt about what’s happening), much of the horror comes from the sheer oppressive life of these people and thin thread by which their survival hangs. The movie doesn’t thrive on jump scares but on a hovering sense of doom and scenes where the intensity of the performances create the palpable sense that no one gets out of this unscathed—and that includes the actors. Seriously, I hope young Harvey Scrimshaw wasn’t permanently scarred by what he has to do in the expurgating scene.

Stylistically, Eggers was influenced by Stanley Kubrick’s The Shining (the Room 237 sequence is recreated for a woodland setting), and that should give you an idea of the slow-burn terror and descent into madness occurring here. All the dialogue was written to match the style of diaries of the period. These archaic phrases (“Why is it when thou dost a wrong, I be a-washing Fathers’ clothes like a slave, and thou art playing idle?”) may turn off some viewers, but they’re one of the movie’s strengths. You have to pay attention to what the characters are saying, but the distancing effect and the sensation of watching people of the seventeenth century rather than actors of the twenty-first helps weave the aura of oppressiveness and alienation.

The Witch is definitely not a “good time” horror film, and it dares to have the sort of ending that sends off viewers with plenty of questions. But its treatment of an early period of US history, showing settlers amidst an unfamiliar wilderness where they’ve brought their own worst enemy with them, is a potent counter to white-bread romanticizing of early colonialism. There’s also an evil goat, and you just don’t get enough of that any more.

The Witch may be too glum for you: a bit too much child endangerment, not enough festive eating. Why not some black comedy cannibal laughs? Then Ravenous is what you crave. Watch before dinner and you may even cut back on the calories a bit!

It’s simply nuts that a major studio released a movie like Ravenous to theaters in 1999. But it happened—I was there in the theater that weekend in February. Me and three other people. Watching a Western black comedy horror film about cannibalism in the Sierra Nevadas in 1847 starring a few award-nominees but no stars. I’m not sure what 20th Century Fox was thinking when they greenlit this, but it certainly didn’t pay off at the time, when the film did nothing at all except excite a few of us that we were watching a future cult classic in the making. I loved the film in ’99, and love it even more now—and it’s picked up the cult following something fierce.

The story takes the Donner Party and the Wendigo legend (not the Algernon Blackwood kind) and sticks them in the Fictional Fort Spencer, an outpost for travelers wending through the Sierra Nevadas toward new settlements in California. Mexican-American War hero and secret coward Boyd (Guy Pearce) is given a commission at this dead-end zone during the winter. The assignment gets more interesting when a starving man, Colqhoun (Robert Carlyle), stumbles into the fort with a horrifying story about his traveling party turning cannibalism when they became trapped in the mountains.

But Colqhoun isn’t who he says he is, and although his story is correct in most ways, he’s left out some personal details. He’s discovered that eating another man’s flesh allows you to absorb that person’s strength. It’s addictive, and Colqhoun has plans to set up a way station to feed his own cannibal colony. Boyd—who’s already had his run-in with feeding from another human—has to be the one to stop the cannibal Manifest Destiny.

Ravenous went through its own hell getting made, with the first director fired only two weeks into shooting and Robert Carlyle fighting to get his business partner Antonia Byrd appointed director over the studio’s terrible replacement choice. Shooting ran into complications with the weather, with the warmest winter in a hundred years in Slovakia interfering with plans for a snowbound setting. But the film that emerged from this chaos is cohesive and clearly has somebody in the driver’s seat, keeping a control over the dark humor and horror. It manages to be queasy (this is about cannibalism, after all) but also hilarious thanks to the sly performances that always make sure viewers are in on how weird this all is. Carlyle is particularly delightful as he transitions from a terror-stricken man to a scenery chewing (or cast-chewing) bad guy delivering witty one liners. The score, a co-composition between Michael Nyman and Damon Albarn, is an absurdist classic that nails the bizarre tonal balance.

Ravenous is an ideal Thanksgiving treat because it deals with eating and the March of American Colonial Progress. Yes, it’s nasty about both of them, but it is a horror film. It takes gluttony to a horrific extreme, interpreted through the inexorable charge to gobble up land. It’s damned smart, super odd, and often hysterical. It’s not for all, uhm, tastes, but I cannot imagine going through November without it. And if it’s to your, ahem, tastes, you’ll probably also make it a permanent part of monthly celebrations.